The small-scale turbulent mixing of heat is an important component of the Sea Surface Temperature (SST) budget in the tropical Pacific, and thus is crucial to a range of processes important for global climate, such as the El-Nino Southern Oscillation. Modulations in the levels of turbulent in the upper EUC of the tropical Pacific have been observed on a range of time scales associated with intraseasonal Kelvin waves, the Madden-Julian oscillation and TIWs. Understanding what drives these modulations is crucial to our understanding of the SST budget.

Are modulations in Zonal Shear, Meridional Shear or Stratification responsible? 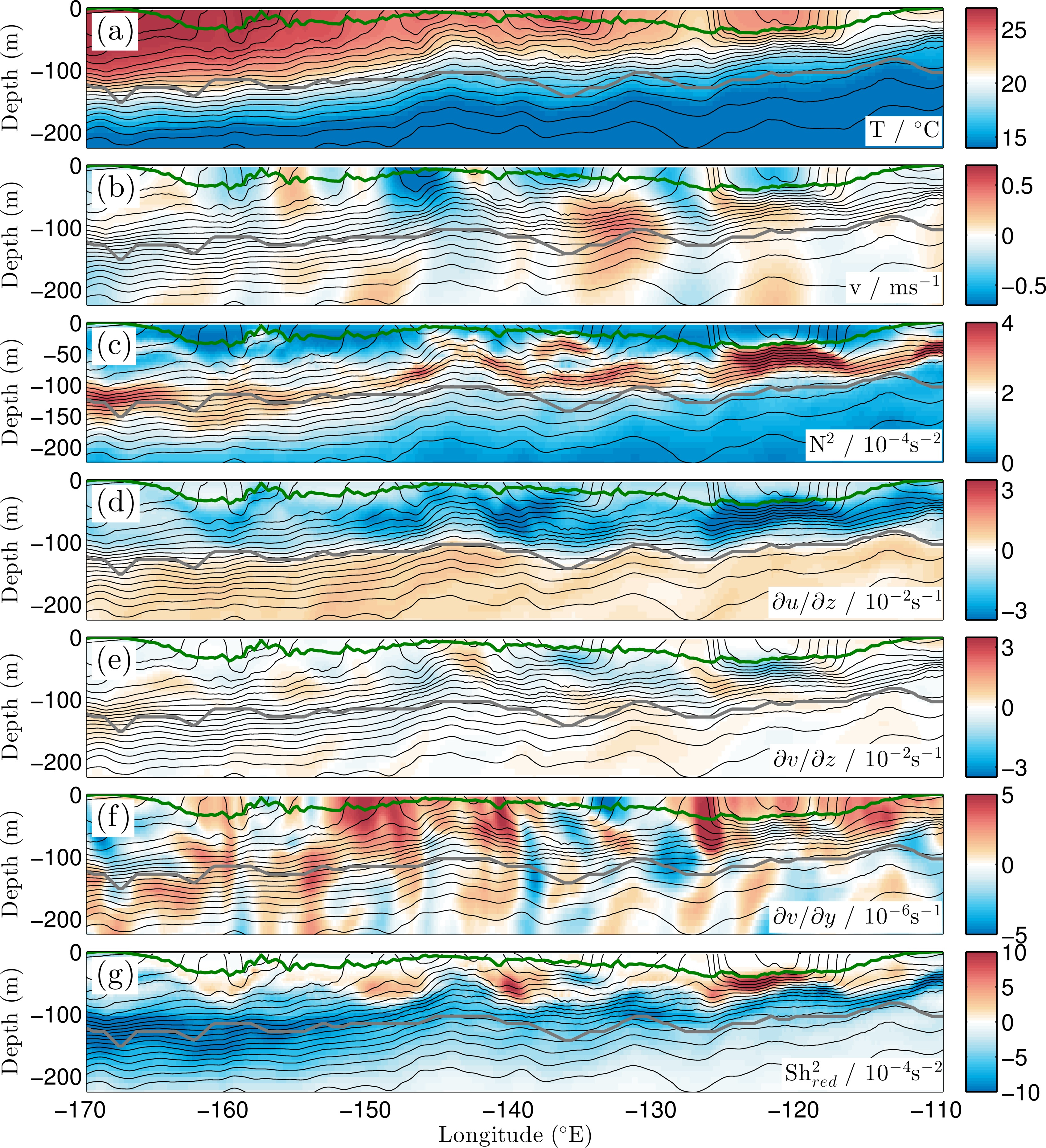 How do TIWs modify EUC shear?

I.e. the zonal shear can change due to horizontal vortex stretching (term 1 on the RHS), vortex tilting of vertical vorticity (term 2), the baroclinic torque (term 3) and frictional processes (term 4). I examined this budget along a set of Lagrangian particles advected online in the simulations that entered the patch of high reduced shear squared near 140W in Fig. 1. The results showed that the dominant term causing an increase in the magnitude of the zonal shear was the vortex stretching term. Further analysis showed that TIW meridional velocities result in a modulation of meridional diffluence dv/dy that then acts on the EUC shear through horizontal vortex stretching. The physics of this mechanism are summarized in Fig. 2. 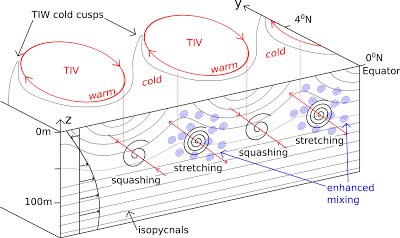 What is the total (rectified) effect of this modulation on the turbulent heat flux?

To quantify the total rectifying effect of the TIW driven modulations on the turbulent heat flux averaged over a TIW wave period, I performed a number of simulations using a simple 1D mixing model of the upper EUC driven by periodically varying TIW strain dv/dy. By comparing simulations with and without the TIW forcing, I showed that adding the TIW forcing resulted in an increase in the average turbulent heat flux by up to 30%. The amount of increase was dependent on the parameterization scheme used for shear driven interior mixing, with potential implications for the role of TIWs in the SST budget of ocean models using different parametrization schemes.

For more information, see my article in the Journal of Physical Oceanography, The Modulation of Equatorial Turbulence by Tropical Instability Waves in a Regional Ocean Model.