The rapid decay of the TIW field in late 2014

During a research cruise to the equatorial Pacific in late 2014 on the R/V Oceanus (see abyssal mixing section), we observed an unusual rapid decay in the amplitude and propagation speed of a nearby TIW. Over a period of only 16 days (half the dominant 30-day period of TIWs), the extent of TIW-driven meridional excursions of the NEF reduced dramatically (see Fig. 1a-c). This rapid decay turned out to coincide with the arrival of a downwelling equatorial Kelvin Wave from the western Pacific (see Fig. 1d). 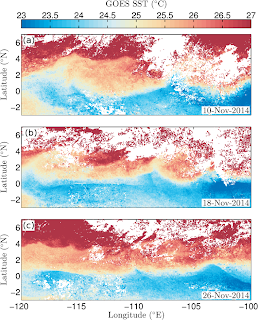 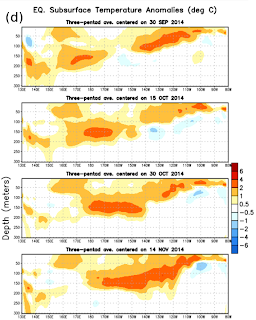 Figure 1: GOES SST observations in the eastern equatorial Pacific on the (a) 10th (b) 18th and (c) 26th of November 2014 showing a rapid decrease in the amplitude of the TIW-driven meridional oscillations in the north equatorial front. (d) Upper equatorial heat anomalies between September and November 2014 showing a downwelling equatorial Kelvin wave propagating into the eastern Pacific. The image in (d) was provided by the NOAA/NWS Climate Prediction Center, College Park Maryland from their Web site at http://www.cpc.ncep.noaa.gov/). The GOES SST data (a-c) was obtained from the JPL Physical Oceanography DAAC (NOAA/NESDIS, 2003)

To investigate whether the Kelvin wave was responsible for the changes in TIW amplitude, we decided to run a set of ROMS simulations forced with intraseasonal Kelvin waves. These Kelvin wave experiments were spun off of a statistically-steady spinup simulation forced with constant atmospheric forcing taken from the strong trade-winds (and thus strong TIWs) season. From this steady spinup run, we forced 60-day period upwelling and downwelling Kelvin wave pulses in the western Pacific. These intraseasonal Kelvin waves propagate across to the eastern Pacific driving changes in the thermocline depth, sea surface height (SSH) and zonal currents (see Fig. 2 a, b). To cleanly separate the TIW flow from the Kelvin wave flow, we performed an ensemble of experiments allowing an ensemble average to remove the TIW variability (see FIg. 2 c,d). We found that indeed downwelling Kelvin waves do result in a significant decrease in the amplitude of the TIW field, here measured using the TIW kinetic energy (TIWKE; see Fig. 2e). In contrast, an upwelling Kelvin wave drove a strong intensification of the TIWKE, which peaked roughly 30-days after the Kelvin wave peak (Fig. 2f). 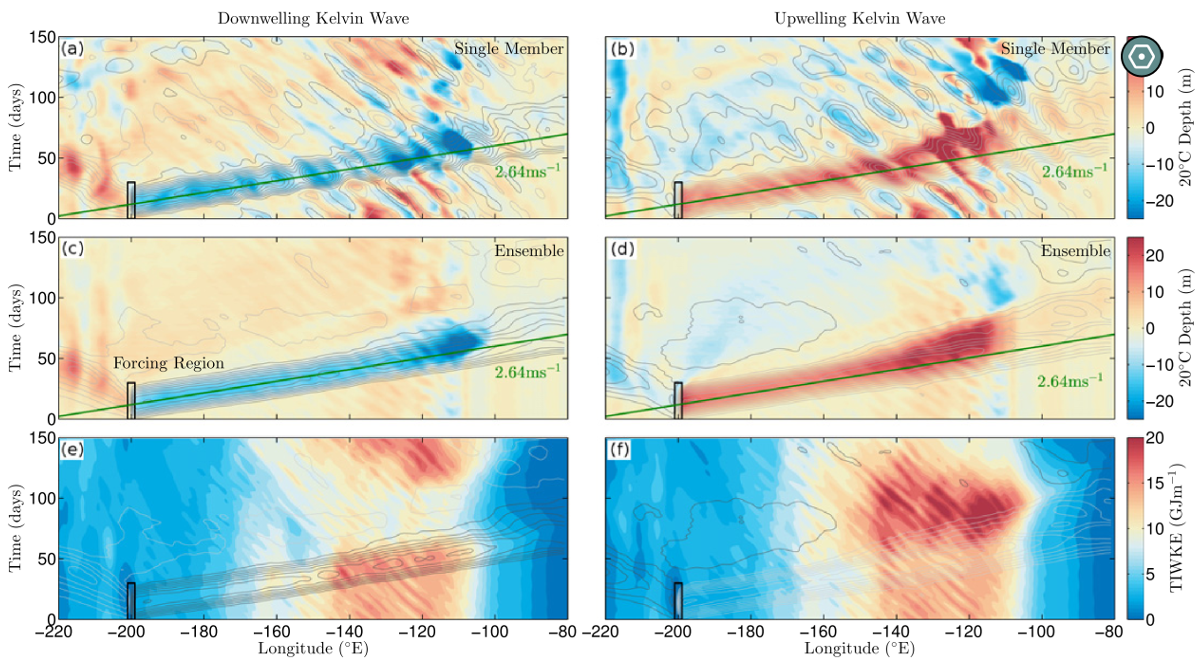 Figure 2: Time–longitude plots of the 20C isotherm depth anomaly on the equator for a single (a) downwelling and (b) upwelling intraseasonal Kelvin wave and for the ensemble average (c) downwelling and (d) upwelling Kelvin wave experiments. Time–longitude plot of the TIWKE integrated over the top 244m for (e) downwelling and (f) upwelling experiments. Also shown are 0.01-m contours of SSH anomalies, with dark gray contours indicating positive values and light gray contours indicating negative values. The forcing region and time period is shown with the black box. The green line in (a)–(d) indicates a phase speed of 2.64ms-1

To explain why the Kelvin waves drive changes in the TIWKE, we examined the TIWKE, or EKE, budget described by the following equation:

The Kelvin waves disrupt this balance by altering the background flow (U and V) and the TIW Reynold’s stress terms (u’v’, w’b’ etc.). In particular, a downwelling Kelvin wave reduces the meridional shear, dU/dy, in the region where the TIWs are strong, thereby reducing the LSP. This kicks off a negative feedback where the TIWKE reduces, driving a reduction in the Reynold’s stress u’v’ and thus a further reduction in LSP. This negative feedback continues until the TIWKE sink terms of dissipation and wave radiation adjust to compensate the changes in LSP. For more details please see my Journal of Physical Oceanography article Holmes and Thomas (2016) Modulation of Tropical Instability Wave Intensity by Equatorial Kelvin Waves.

Intraseasonal Kelvin waves are known to be critical ingredients for initiating sustained perturbations in the coupled tropical atmosphere-ocean as part of the El Nino - Southern Oscillation (ENSO). In particular, downwelling Kelvin waves initiated by westerly wind bursts in the western Pacific are known to drive warm SST anomalies in the eastern Pacific through vertical and zonal advection. In our simulations we do indeed see these SST anomalies (Fig. 3 a, b). However, a single downwelling (upwelling) Kelvin wave pulse should drive a net warming (cooling) due to the net displacement of the zonal gradient in SST to the east (west). In our simulations we find that this net SST change is damped by the changes in the TIW meridional heat fluxes (due to the change in TIWKE), which counter the Kelvin wave induced SST anomalies (compare dotted and dashed lines in Fig. 3 a, b). This results has implications for the role of TIWs in the initiation of ENSO events. 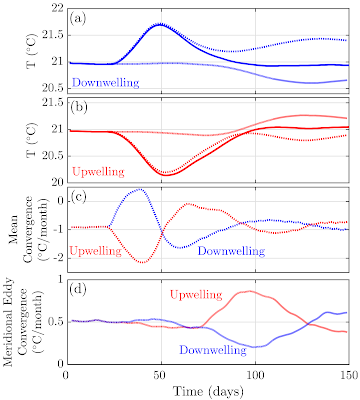 For more information, see my article published in the Journal of Physical Oceanography: Modulation of Tropical Instability Wave Intensity by Equatorial Kelvin Waves.