Tropical instability waves (TIWs) are cusp-like perturbations that form on the sea surface temperature fronts either side of the eastern Pacific cold tongue in the equatorial Pacific. They form through a combination of barotropic instability acting on the lateral shears of the zonal current system and baroclinic instability acting on the equatorial fronts. They have been studied extensively to determine their formation mechanisms, large-scale fluxes and influences on processes such as ENSO.

Tropical instability vortices form to the north of the equator when TIWs become strong enough to go nonlinear and form coherent anti-cyclonic vortices of radius ~ 500km. Due to their energetic circulation, strong anticyclonic vorticity and location close to the equator, the water forming the core of the TIV is characterized by a Rossby number of order -1. Therefore, the core water is also characterised by small values of the Ertel potential vorticity (PV):

is the vertical component of the relative vorticity, b is the buoyancy,

is the vertical buoyancy gradient or stratification,

Where does the low PV water that forms the core of the TIVs come from? Since the Coriolis parameter changes sign at the equator, one possibility is that it is formed from Southern Hemisphere water advected over the equator. Other possibilities are that the PV is locally lowered before and during its entrance into the tropical instability vortices through frictional processes (down-front winds) or diabatic processes (surface cooling).

The image below shows a set of Lagrangian floats at times two months apart in a ROMS simulation of the Equatorial Pacific Ocean. At the initial time the floats are located mainly along the Equator (in the Equatorial Undercurrent (EUC)) with a small number located more to the north in the North Equatorial Counter Current (NECC). Two months later all the floats have entered a TIV. The floats experience significant Lagrangian changes in temperature and salinity, showing that the TIVs homogenise T-S properties and drive significant lateral mixing. This TIV driven lateral mixing across the North Equatorial Front can warm the Equatorial Cold Tongue and thus influence processes of global climate importance such as the El Nino - Southern Oscillation. 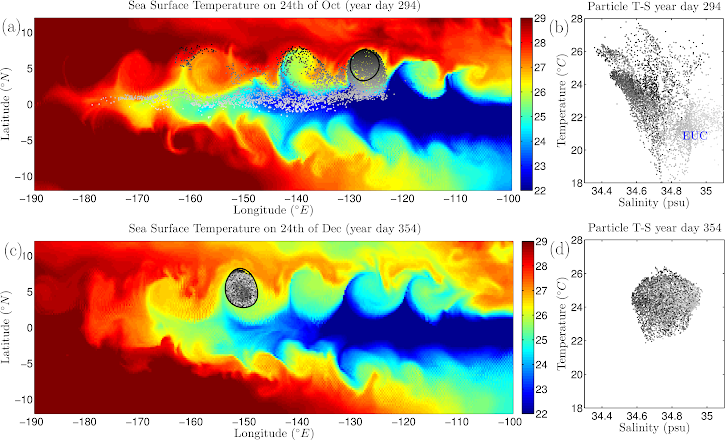 In my paper published in the Journal of Physical Oceanography (Potential Vorticity Dynamics of Tropical Instability Vortices), I investigated the mechanisms through which the strong anticyclonic (clockwise in the Northern Hemisphere) vorticity of TIVs is formed. By studying the vorticity and buoyancy equations along Lagrangian fluid parcel tracks I was able to show that several processes contribute to the creation of TIV anticyclonic vorticity. Rearranging the equation for the PV above and normalizing by a mean

appropriate for the vortex center at 5N gives;

Showing that changes in the relative vorticity 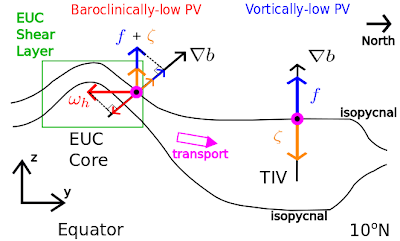 Figure 2: A schematic showing the mechanism of baroclinically-low to vortically-low PV conversion and how it leads to the formation of strong anticyclonic vorticity within a TIV core.

This mechanism is also involved in the formation of so called intrathermocline eddies (ITEs) with scales of some 10’s of kilometers in the midlatitudes. Thus we have shown that there are similarities between midlatitude submesoscale physics and larger-scale flows at the Equator, similarities that can be exploited to understand some aspects of equatorial dynamics.